Fun, Friends, and Food At Herman's
That's What Life Is All About 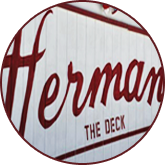 Our restaurant is over 40 years old and we pride ourselves on tradition and excellence! Visit us Today!

In 1929 P.M Pace bought the land where Herman's stands today. He built a house, raised livestock, and farmed the land. In 1941 he sold a one-acre tract and buildings to Rolla H. Fitch who opened the first restaurant on the site, the Royal Oaks Tavern.

On New Years' Day 1964, a Fayetteville native named Herman Tuck opened what we know today as Herman's Ribhouse. The menu had nine choices on it, "Rack O'Ribs, Plate O'Ribs, BBQ Chicken, a large T-bone and five sandwiches. A large aquarium adorned the room and the bare walls quickly filled up with pictures of Herman's Fans.

In the years of 1990, Herman Tuck retired. Herman brought in long-time family friends Bruce and P.J. Barnes to keep the business going with “his kind of” tradition. Bruce took the nine item menu further by adding Filets, Babyback ribs, and Shrimp remoulade. In 2000 Bruce and P.J left Herman’s to start their own restaurant. Therefore, in July 2000, Hermans sold the restaurant to Benny Spears and Shelby Rogers who brought the tradition of Herman’s into the 21st century with new equipment and an outdoor deck. In 2013 Shelby Rogers sold the restaurant to long time employees Nick and Carrie Wright, who are brightening the traditional burning flame at Herman’s while also sharing the Herman’s experience with new clientele.

The legend lives on….

Featured on Todd's Taste of the Town